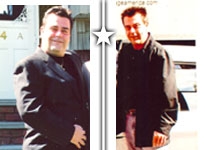 Mike D. Florida
Dear Tony: This is my success story: I was working long hours in the financial business in New York -- eating and drinking myself into oblivion. By nature, I am a workaholic. Three years ago, my father passed away. After sinking into somewhat of a depression and getting even larger (270 pounds). I decided to break out the Gazelle that was collecting dust in my bedroom for over a year. As I started losing weight, every day the workout became easier and easier, especially when I began using the tapes and doing it correctly. As the weight began to come off, my energy increased and my attitude toward life changed for the better. I decided to get out of the financial business and start to re-evaluate my life. I decided to take a position as a manager in the restaurant that my sister owns. Oddly enough, I continued to lose weight while working in a restaurant! I lost a total of 90 pounds and ten inches. Then, I met Desiree, my fiancée. We moved to Florida and are now living happily ever after. Thank you Tony! Mike - Cape Coral, FL
2-edgeplus