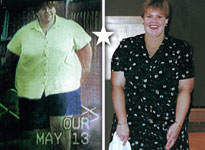 Michelle Aurora
Dear Mr. Little: When I purchased your product back in February I was very discouraged with myself and my weight. In 1998 I had a son and put on 87 pounds. I previously lost 70 pounds. Only 30 pounds of that weight came off. Then in September 2000 I had a little girl, I put on 32 pounds. At my highest weight ever and needing to lose 100 pounds or so, I did not know what to do. Three months after having my daughter I could not sit on the floor and play with my son. It hurt my tailbone so badly. Finally in January 2001 I told my husband what I wanted and what I knew it would take for me to get back to a goal weight. So for Easter/Mothers day/Birthday and Anniversary gift I received my Gazelle and it was the best gift I could have received. Sincerely, Michelle
2-edgeplus