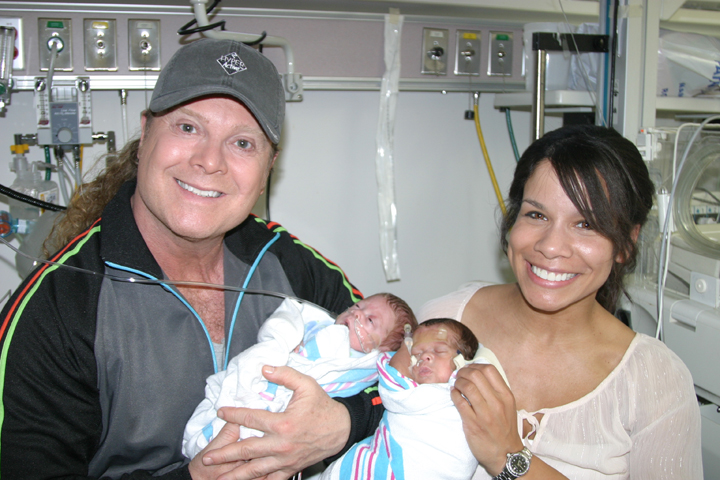 ParentDish – Tony Little: Push Your Body, Not Your Kids

Tony Little has made it his business to push Americans to get in shape, but when it comes to his own kids, being pushy is out.

Little, 53, who shot to fame as the TV pitchman selling workout videos and the Gazelle Glider exercise machine, has helped sell $3 billion worth of fitness products by motivating others and recently published his book, “There’s Always a Way: How to Develop a Positive Mindset and Succeed in Business and Life” (Wiley).

But his goal now is to simply set a good example for his kids — daughter Tara, 23, son Trent, 22, and 9-month-old twins Cody and Chase — teaching them to persevere and overcome obstacles.

“I don’t think you should push too hard,” he tells ParentDish. “A lot of parents who push too hard, their child looks back and says: ‘Well, it didn’t work for you.’ You really have to walk the talk.”

Little says he has had to walk through plenty hardships of his own in life, the latest being the premature birth of his twins and the complications that followed. The twins were due in early March, but last Nov. 23, Little’s wife, Melissa, woke up in pain and bleeding. The couple raced to the hospital, where they were lucky to find her doctor and a delivery room ready for another patient’s early morning
C-section. The babies were small — Cody was 1 pound, 15 ounces and Chase just 2 pounds — and they were kept on an incubator for three months. Chase had to have surgery when he was weeks old to close a heart valve and Cody had brain bleeding that has since healed.

“It’s one thing after the other, but I have to put everything in somebody else’s higher hands and I have to be a believer,” Little says. “Nothing is going to be positive for them if you don’t think it’s positive.”

It’s a philosophy that the ponytailed fitness guru has built his career on. He’s had to fight back from a tough childhood, a near-fatal car accident, Tara’s brain surgery at age 10, Trent’s recovery after being hit by a car and now the twins’ birth complications.

Little says he went through a difficult childhood in which he was raised by a single mom after his father left the family. Trouble with the law as a teen led his mother to send him to Florida to live with an uncle. Little says he hated everyone for it, but he now realizes what a hard decision it was for her and what a difference her sacrifice made in his life.

“She got me out of a bad environment and put me in a better environment, an environment in which I excelled,” he says. “So she’s probably responsible for all my success.”

Little went on to become a bodybuilding champion and, in the 1980s, pitched his idea for a line of workout videos to the newly created Home Shopping Network and become one of the earliest infomercial stars. He is now CEO of his own company, Health International Corp., which sells fitness equipment, clothes, food, books, videos and wellness products.

But Little says he keeps the “You can do it!” cry of his TV pitches for the commercials, and never liked pushing his kids. Even when Trent became 70 pounds overweight as a youngster, Little says he let him find his own way to lose the weight.

“I could never say, ‘This is your problem.’ I just tried to be a good role model,” he says. Eventually, Trent lost the weight on his own, playing sports and eating healthily at home.

Tara and Trent, the children from his first marriage, are both about to finish college and are planning to earn graduate degrees in psychology and medical school, respectively.

Little says he is not sure if he will be a different parent with the twins, although he is looking forward to spending more time with the babies than he did when his older children were small and he was building his business.

Chase still needs a feeding tube and Cody a breathing monitor, but they are growing stronger every day. They each now weigh around 17 pounds and get weekly physical therapy to help develop their legs, a trouble spot for preemies.

“We’re fortunate that they’re alive. We’re happy they smile every day,” Little says. “That right now is what we can go on.”